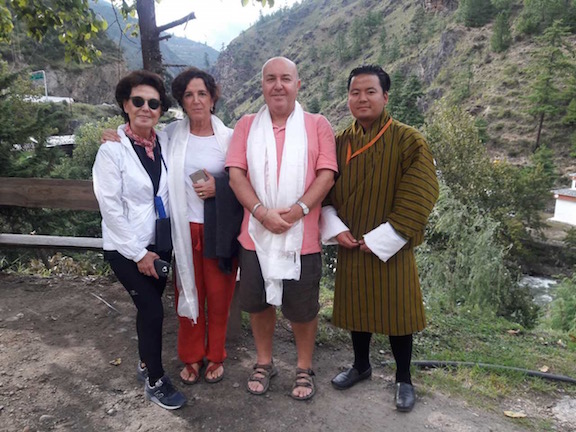 8 Days Group Tours to Bhutan. The 8 Days Mountain Kingdom Tours gives the opportunity to discover the best of this Himalayan Kingdom. The itinerary takes you to explore Chelela Pass the highest road point in Bhutan, Dochula Pass(3100M) the place where you witness the grand Himalayan snowcapped Mountains and ancient temples in Paro.

Arrival at Paro International Airport. The airport is one of the smallest airports with the only local airlines operating in the area. Upon arrival, our team from Tour Bhutan will receive you at the airport and drive you to Thimphu. On the way visit the Chuzomsa confluence between Paro, Thimphu, and Haa. The confluence has three monasteries built between the river. The monastery represents Nepal, Tibet, and Bhutan style of structure. Drive further to Thimphu. If time permits visit Craft bazar where you get great selection of Bhutanese handicrafts. Over night at Hotel.

Thimphu sightseeing begins with a visit to BBS tower the viewpoint to see the Thimphu town. On the way, you can also visit the Takin preservation center. The center was open to preserve the national animal of Bhutan in 2003. After lunch visit the Folk heritage museum. In the evening you will be left on your own to walk around Thimphu Town. Overnight at Hotel.

After early breakfast drive to Punakha. On the way visit the oldest Simtokha Dzong built in the 16th century. Enjoy the Bhutanese architecture. Visit Dochula pass (3100m) on the way towards Punakha. The pass offers a grand view of 10 Himalayan mountain ranges. The pass also has many beautiful hiking routes where guests can explore if interested.Further, drive to Punakha. Visit Chimi Lhakhang located on a small hilltop overlooking lobesa valley. Dinner and over night at Hotel.

Early morning visit the longest suspension bridge connecting village with Punakha Dzong. Proceed to gangtye. Gangtey is beautiful valley in western Bhutan. There are about 70 household living in the area. the place is also breeding centre for Black Necked Crane. Walk around the village. Over night at Hotel.

We start early today. After breakfast drive to Trongsa via. Gangtey. En-route sightseeing in the valley of Wangdiphodrang includes: visit the restored of Wangdiphodrang Dzong (from outside) built-in 1638 which was recently destroyed by the fire now under construction. Legend relates that as the people were searching for the site of the Dzong, four ravens were seen flying away in four directions. This was considered an auspicious sign, representing the spread of Buddhist religion to the four points of the compass. The Dzong is situated at the confluence of Mo Chu and Tang Chu rivers. Drive further to Gangtey.

After Lunch, drive to Trongsa. Visit Trongsa Dzong, the most impressive dzong in Bhutan, built in its present form in 1644 by Chogyal Minjur Tempa, the official who was sent by Shabdrung to unify eastern Bhutan and enlarged at the end of the 17th century by Desi Tenzin Rabgay. Trongsa Dzong is the ancestral home of the present Royal Family and the first two hereditary kings ruled Bhutan from this Dzong. Then Visit Ta Dzong, an ancient watchtower. The chapel inside the Ta Dzong is said to be dedicated to the Trongsa Penlop Jigme Namgyal. Overnight in Hotel.

Visit the Taa Dzong the museam just above Trongsa Dzong. The museum offers the best artifact in the Kingdom of Bhutan. Drive to Paro via Thimphu. Lunch will be served in thimphu.

After early breakfast drive to chelela Pass(4200m). the drive takes about 1 hour from Paro city. Chelela pass is Bhutan’s highest road point. From the pass, you can see the remote Haa district. You can also hike the Chelela Pass to see the wildflower and spring is the best time to see the wild flowers. Drive back to Paro and visit Farm house. Over Night at Hotel.

Hike the popular Tiger Nest temple perched on a rocky cliff 900m above Paro valley. The monastery takes about a 3-hour walk from the base camp. The first establishment took place in 746AD by Guru Rinpoche who flew from Tibet on the back of tigress and meditated here on this cave. The temple is very important for locals in Bhutan and thousands of people visit this temple every day. Over night at Hotel.

Day 09 Paro to Airport and see Off

Today is the end of your 8 Days Group Tours to Bhutan. Our team from Tour Bhutan will assist you to the airport and see you.

Why Book this Group Tour with Us?

Mail Us Your Inquiry

Hotels, Resorts and Farm House Used for the Tour

Rema Resort in Paro is a beautiful resort just beside the Paro river. The hotel offers the best view of the Paro river and the village around. Read the Reviews. 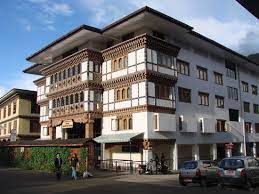 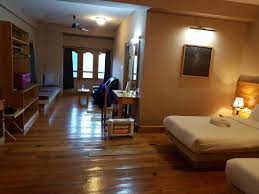 Hotel Lobesa, is a three stars hotel situated in Punakha with a commanding view. Immerse yourself in with beautiful view over the surrounding countryside. Read the Reviews. 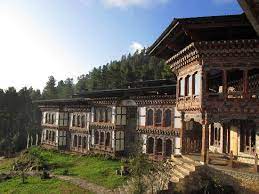 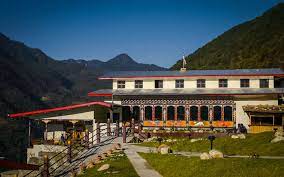 Yangkhi Resort.  This hotel is in a fantastic location and has stunning views of the valley. Lovely hotel and staff, you can see the Trongsa Dzong from most of the hotel rooms. Read the Reviews. 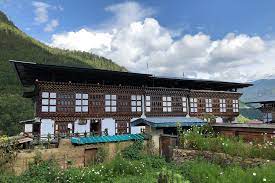 Haa Farm House in Haa.Ugyen Farm House. The farmhouses of Ugyen and Chimmi are located in the beautiful traditional village of Dumchoe in the heart of the Haa Valley, at the base of 3 sacred hills. Explore the local tradition in Haa.