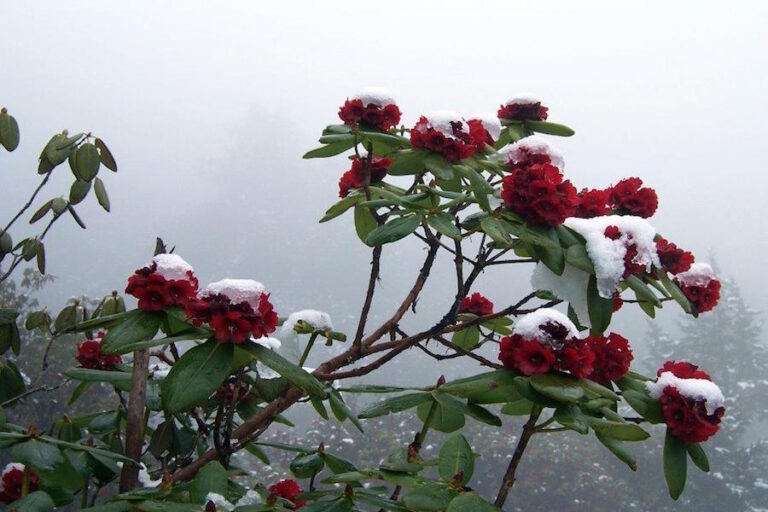 Bhutan has 46 species of Rhododendron found in Bhutan. Bhutan favors the growth of varieties of Rhododendron. Rhododendron grows above the altitude of 2890m. Varieties of Rhododendrons are displayed in Lamperi Park. The celebration is followed by a special dance and exhibition, local culture and cuisine, arts & crafts, traditional games, cultural programs, guided walks & activities. The festival displays different species that are in full bloom in their natural habitat.

Despite its small size the Park has a wide assortment of flora and fauna. A unique attraction of the park are the Rhododendrons. Of the total 46 species that grow in Bhutan, 40 species are found here. This includes the 29 species that grow naturally in the area and another 11 that have been planted in the park Garden. The Park also has 114 species of ferns, as well as numerous wild orchids. The Royal Botanical Park also hosts rich animal life including the magnificent Bengal tiger, the elusive red panda, leopard, leopard cat, musk deer, sambar deer, Himalayan black bear, Monal pheasant and Satyr tragopan. It is a haven for bird watching with more than 220 species being recorded.

The festival tour covers the most popular places of Thimphu, Punakha, Gangtye and Paro.

Arrival at Paro airport. Our team will greet you with Tashi Khadhar and escort you to Thimphu. On the way visit Tamchog Lhakhang across the river. The view is excellent and in Thimphu visit Largest Buddha Statue over looking at Thimphu Valley.

The guide will assist you to go around Thimphu city. Thimphu is the largest city of Bhutan. It has a population of more than 100000 people.

Witness the beautiful Rhododendron festival at Lamperi National Park. The Royal Botanical Park is the country’s first nature recreational park, established in 2004 to preserve the rich natural biodiversity of the area. This area of 47sq. km in the Dochula Conservation area has been delineated for protection and development into a site for eco-tourism and nature education.

Hike the popular Tiger nest temple. The hike takes depending on your pace. Some parts are quite steep so go slow and be sure of your footing – especially when you make the return trip downhill which can be quite slippery. The hike is about 6 km (4 miles) in length round trip

Day 7 Paro to Airport and see Off