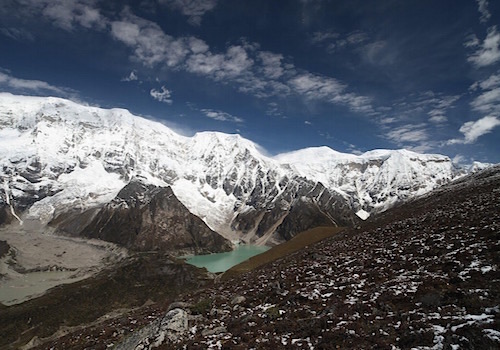 Trip Over View: The 21-day Gangkar Puensum Trek is a high-altitude trek that will lead you to the uncharted territory of this mountain-giant. It will take you on a. Trekking on rugged terrain, you will venture into unexplored mountainous terrain where you will see breathtaking landscapes and gorgeous views all along.

Upon arrival at Paro airport, received by a representative of Tour Bhutan, transfer to the hotel. Dinner and overnight at the hotel in Paro.

After breakfast, drive to the ruins of Drukgyel dzong, now in ruins was built by Shabdrung Ngawang Namgyal to commemorate the victory over the Tibetan invaders in1644; the dzong name’s means indeed “ victorious Druk “. The Dzong was used as an administrative center until 1951 when a fire caused by butter lamp destroyed it. Then visit Kyichu Lhakhang, one of Bhutan’s oldest and most sacred monasteries dating from the introduction of Buddhism in the 8th century and then visit Rimpung Dzong (Paro Dzong) built in 1646 by Shabdrung Ngawang Namgyal. The Dzong presently houses administrative offices. After lunch visit the Ta dzong, an ancient watchtower, which has been, since 1967, the national museum of Bhutan. Dinner and overnight at the hotel in Paro.

The day in Thimphu begins with visit to 13th arts and craft School, Textile museam followed by a visit to Trashichhodzong.

Drive to Punakha. On a clear day, you will view 360-degree view of snow-capped Mountains. The roads are good and your trip is worth the visit to Punakha. The drive takes you to Dochula pass which offer the wonderful 360 view of the HIMALAYAS. You can spend sometime here at the pass. While driving down the Punakha valley the temperature increases as Punakha is a place where paddy is harvested in plenty. While in Punakha visit chimi lhakhang the fertility temple. People have a belief that if you are infertile and you pray at this monastery you get the blessing of a child. Over Night at Hotel.

Drive to Gasa. Depending on the road condition, the drive from Punakha to Damji takes about 2/3 hrs. From Punakha, the road goes towards the north through the idyllic countryside past agricultural fields and subtropical forest to the small village of Damji(2430mts). The trek begins with a gentle climb past the village and then follow the side of the valley with the view of Gasa Dzong and the snowcapped peaks at the background at several points. Then the trail descend down to a large stream below Gasa to Gasa Hot springs. Gasa Hot Springs and its accommodations are managed by the Jigme Dorji Wangchuck National Park staff. The hot springs are located by the bank of the stream below the Guest House. There are five pools with water temperatures ranging from mild to extremely hot. People from all over Bhutan come here to relax in the restorative pools and treat themselves for many days and we can also do the same after our long day of trek.

After breakfast we proceed to Koina. Koina takes about 5 hours normal walk through the forest.

The trail winds up and down along the river valley of Mo Chhu avoiding natural obstacles and affording breath-taking views of the raging river, feeder streams, and waterfalls. Lots of ups and downs will lead you to Kohi Lapcha at 3.300 m. The trek then drops down to the large stream of Koina Chhu, where you will find the campsite of Koina.

Explore around the village. You can go and visit any of the houses around. By tradition one can go to any house without an invitation. A cup of tea or Chang (local drink) is always offered. The people in this village are very interesting with a unique dress, language and ornaments.

From Laya descend to army camp and continue following the river till the turn off point to Rhodophu. After lunch continue the climb through rhododendron bushes until the camp. Altitude 4,350m. Walking time 8-9 hours.

This is the longest day of the trip and therefore very essential to start very early. We start at 5 am by climbing to Tsimola (4700m) After crossing the first pass and at the little summit one can have a superb view of Lunana, Jumolhari and Jichu Drake. This path is flat for another four hours till the climb to Gangla Karchula pass (5,080m). The view from the pass is breathtaking. The whole range of mountains, including Masagang, Tsendegang, Teri Gang can be seen, after the pass there is a very long descent to Tarina valley. Altitude 3,980m. Walking time 10-11 hours.

The day is much easier as the path follows the river down valley. Lunch at the lowest point (3500m). After lunch climb up about 300 meters to the village of Woche. Altitude 3,800m. Walking time 6-7 hours.

The Trek starts through juniper and fir forests and then through rhododendron bushes. We climb up to Keche la pass (4,480m) where one can have a great view of the mountains. After the pass, descend to the river walking through the village with stunning views of Table Mountain and others. Follow the river, one of the main source of Phochu, till Lhedi village. Altitude 3,650m.

The trek starts with a climb up to the ridge with a great view of the Table Mountain and Thanza valley below, The ridge altitude is 4,500 m and rises gradually up to 4,650m near by the foot bridge. After lunch walk up towards the left side of the bridge enjoying the views of the snow peaked mountains. Climb up ridge after ridge until you reach the camp at Tsorim at the altitude of 5, 150m. Then down to the camp at 5125m. Walking time 8-9 hours.

This is the highest of the trip and we start the day with a short climb to the Tshorim lakes. Walk on the side of the lake enjoying the panoramic views of the Gophula ranges. The last climb to Gophula pass (5,230m) is very short. After the pass descend to the base camp walking along the ridge. Enjoy the great view of Gangkar Puensum. Those with a lot of energy can divert to the left side to climb up the Pyramid Peak for better view. Others can go down to the base camp nearly Sha Chu at the altitude of 4,970m. Walking times 6-7 hours.

Rest day at the base camp, enjoy the great view.

Day 17 Base Camp to Gese Woma

Time to leave the beautiful mountains, but the trek is far from over. The path follows the Sha Chu and descends gradually to Geshe woma at the altitude of 4,200m. Walking time 6-8 hours

The path continues following shachu for two and a half hours until the stiff climb to Sakala begins. Visibility along the Sakala trail is poor so one must watch the top of the ridge for guidance. Lunch nearby a yak herder’s camp. After lunch climb up to Sakala pass at the altitude 4,800m. Descend to the lakes and another short ascent to Wartangle pass (4,590m). The scenery once again is stunning with small lakes and mountain peaks. Camp at the altitude of 4,000m. Walking time 8-9 hours.

A short half hour climb to Juelela (4,400m). After the pass descend to the riverside through dense rhododendron, juniper and conifer forest. After the bridge a little climb to Dur Tsachu hot spring, where Guru Padmasambava is supposed to have bathed in the 8th hot spring. Walking time 5 hours.

Today we go across the last pass of the trip (Juelela pass). From the stream it is along and steady climb again with great views of the mountains in Lunana. One comes blue lakes and yak herders camps to arrive at the Thochechen camp at an altitude of 3,850m. Walking time 8-9 hours.

This is the last day of the trek. Here we change from yak to pack ponies for carting trekking gear. The path follows the Chamkhar Chu, descending gradually with few climbs. The trek ends when you arrive at Dhur village.

Day 22 Bumthang to Paro by Flight and City tour

25 minutes flight to Paro from batpalatng domestic airport is one of the amazing mountain flight in the country.

Day 23 Paro to Airport and see off

Todays ends the best Gangkar Puensum trek of Bhutan. Our team from Tour Bhutan will assist you to the airport and seeing you off.

Why Book This Trek with Us?