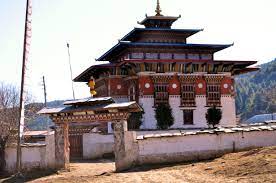 Rigsum Goenpa trek in Bhutan. Its a 3 days circular trek starting from remote Trashi Yangse district. Legend has it that Lama Tshering Gyamtsho (Disciple of the 9th Je-Khenpo) from Punakha Drstshang lived during the 18th century founded a cave with clear body prints of Rigsum Goenpo when he reached a place called Pemaling located towards the north of Trashi Yangtse. A powerful local deity called Genyen Phanbu was the guardian of the sacred cave. The Lama befriended the deity with his spiritual power and built a small Lhakhang for his meditation. After the death of Lama, his nephew and spiritual heir Lama Jangchhub Gyeltshen renovated and extended the Lhakhang with unique mural paintings of the life history of Lord Buddha which can still be seen.

Why Book the Trip with Us?