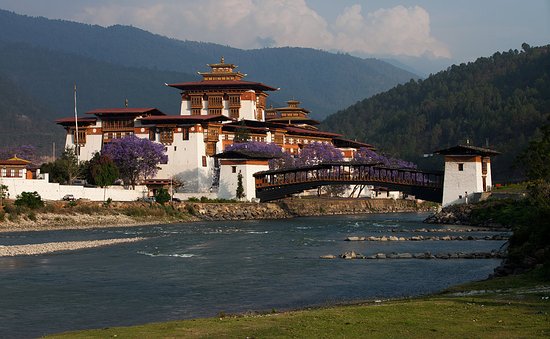 The Dzong is located between the Pho Chhu (Male) and Mo Chhu (Female) rivers in the Punakha–valley. The source of the Mo chu river is in the northern hills of Linghsi and Laya in Bhutan, and in Tibet. The Po Chu River is fed by glaciers in the Lunana region of the Punakha valley. After the confluence of these two rivers, the main river is known as Puna Tsang chu or Sankosh River and flows down through Wangdue Phodrang, crosses Bhutan–India border at Kalikhola, and eventually meets the Brahmaputra River.

In view of the healthy climate in the region, Punakha is the winter capital of Bhutan. The head of the clergy of Bhutan with his entourage of monks spends the winter in this dzong. Jacaranda trees grow around the dzong, blooming with mauve flowers in the spring.

As Punakha Dzong is located at only 1,200 meters, you will not suffer from oxygen shortages as you would in higher places such as Paro Taktsang (Tiger’s Nest), so it is a good place for beginner hikers to start from, as you may struggle with altitude sickness in the first few days. Punakha is also the center of Bhutan’s second longest suspension bridge (Punakha Suspension Bridge) and is about 7.5 km (4.5 miles) by car to Chimi Lhakhang, the Divine Madman’s fertility temple

What is the importance of Punakha Dzong?

Why did Zhabdrung built Punakha Dzong?

The Punakha Dzong is the most important dzong that Zhabdrung built and it played a crucial role in his life. Constructed as his central seat in lieu of his spiritual and temporal seat in Ralung in Tibet, it was designed to accommodate 600 monks