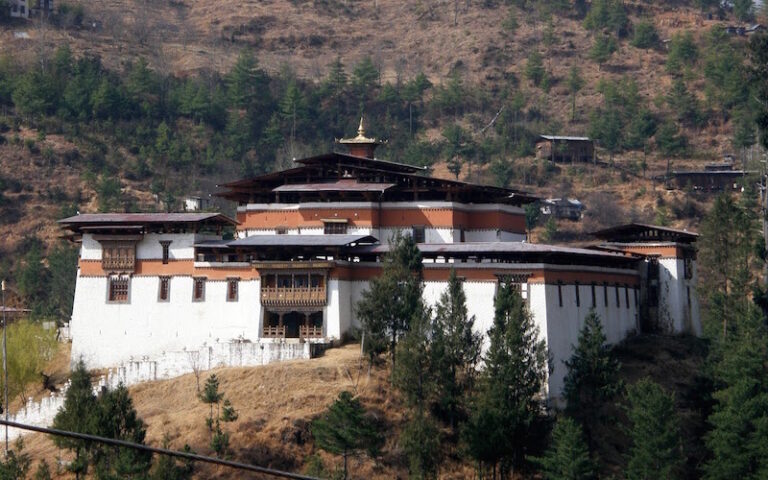 Simtokha Dzong, which is also known as Sangak Zabdhon Phodrang, meaning the Keeper of Secret Chants, is a fortress located near the capital city of Thimphu. The Dzong is built on a projecting ridge with deep gullies separating it from the main hill. Its strategic position overlooks and commands the entire Thimphu Valley. It is approximately five kilometers south of Thimphu Town, on the road to the Paro-Phuentsholing highway.

History of the Dzong

Thabdrung Ngawang Namgyel was one of the greatest builders of Dzongs in Bhutan. To consolidate his newly acquired domain in western Bhutan and to defend himself from both the internal foes and external enemies he started constructing Dzongs, beginning with the Simtokha Dzong.

The location of Simtokha Dzong has a great historical significance. The present place where the Dzong stands is at the boundary common to three prominent western regions:

The intersection was marked by three stones which belonged to the people of Punakha, Thimphu and Paro. Surrounded by these three stones was a piece of land known as Sem-tokha or Sem-dokha with a temple built on it. This temple was later gifted to Zhabdrung by Lam Pangka Shong. History says that a Tibetan Lama Zhang had prophesized that Zhabdrung Ngawang Namgyel would build a Dzong at the junction of three western lands. To fulfill the prophecy and honor the offer of Lama Pangka Shong, Zhabdrung decided to build the Dzong.

The area was inhabited by many demons, and legend has it that the site where Zhabdrung decided to build the Dzong was occupied by a demon that would harm travelers who often stayed during the night. Zhabdrung visited the place and subdued the demon, banishing her into the rock on the hill where the present Dzong is located. The Dzong was constructed enclosing the rock, to ensure the continuing imprisonment of the demon. Hence the Dzong derived its name as Simtokha, from the word sinmo (demon), do (stomach), and kha (on) – the Dzong on top of the demon’s stomach.

In 1629, which corresponds to the 11th Rabjung and Earth Snake Year of the Bhutanese calendar, he laid the foundation of the Dzong. Construction of it was undertaken by Tango Choje Mipham Tshewang Tenzin with assistance from Zhab-drung’s devotees and disciples.

This was greatly hindered by five groups of Lamas (Lam-Kha-Nga), comprised of Lhapas, Barawas, Kathogpas, Ny-enyingpas and Chagzampas. They already had certain areas under their control, especially in the valleys of Paro and Thimphu. Feeling threatened, they formed a coalition and obstructed the construction of the Dzong. They cut off the water supply, obstructed the smooth flow of building mate-rials, and maimed or robbed the workers. The life of Zhab-drung was also placed in danger as they plotted to assassinate him. With support from the deities, the coalition attack was repelled, killing their leader, Lama Palden of Langmalung, in the battle. Zhabdrung accomplished his task by engaging his people at work during the daytime and teaching the Chag-chen Choe-drug, the practice of maha mudras, to them during the night.

The Dzong was successfully completed in 1631, corresponding to the Iron Sheep Year of the Bhutanese calendar, and was named Sanga Zabdon Phodrang (Palace of the profound meaning of secret mantras). The Dzong was consecrated by Yongzin Khay Wang Lhawang Lodroe and coincided with the birth of Gyalse Jampel Dorji, Zhabdrung’s son from his consort, Thricham Golkar Dolma

This Dzong, modeled on the Gyal Gyad Tshel Institute of Ralung and the first of its kind to be built in Bhutan, has survived to this day. The utse has twelve sides, which makes it a dodecahedron, unlike any other Dzong in Bhutan. It also has a special significance in housing the first ever inner sanctum of the largest statue of the deity Yeshey Gonpo (Mahakala), the protecting deity of Bhutan.

The nangten (main relic) of the Dzong is the statue of the Buddha Shakya Gyalpo (Buddha of compassion). It is believed that fortunate visitors will be able to see a light shining from the chest of this Buddha statue. The Dzong also hosts a statue of the God of Compassion (Chenrezi). Wall paintings of one thousand images of the Buddha beautify its temples. The scriptures of Kanjur (translation of the words of Buddha) and Bum (prajnaparamita), which are thought to be unique and special, are among the precious items of the Dzong. These texts were written by the and Desi, La Ngon-pa Tenzin Drugda, in 1656 and fully completed by the 4th Desi, Tenzin Rabgyal, in 1674. There are twenty-one carved statues of Tara (Dolma), eight manifestations of Guru (Guru Tshengye), eighty Maha Siddhas (Drupthobs), the God of wisdom and compassion (Jampelyang), and bodhisattvas made by the 3rd Desi, Chogyal Minjur Tenpa, in 1671. An additional singular feature of the Dzong is that it has more than three hundred slate carvings of images installed by Chogyal Minjur Tenpa, the 3rd Desi of Bhutan, in 1671. The consecration of these carved slate images, which were graced by Gyalse Tenzin Rabgay, the 4th Desi of Bhutan, was accompanied by auspicious signs of thunder, quakes, rain of flowers, and oozing of holy water from the images carved upon the slates.

Paintings of the cycle of birth and rebirth, and Thuen Pa Puenzhi (Four Harmonious Friends), also decorate the walls of the Dzongs. On entering the Dzong, one is greeted by a prayer wheel constructed by Lama Norbu Wangchuk, the 3rd Principal of Rigzhung (Institute of Language and Cultural Studies).

The Dzong houses Zhabdrung Ngawang Namgyal’s pal-ace, which is restricted to visitors. Today there is also a stat-

ue of Zhabdrung, donated by the Fifth King, Jigme Khesar Namgyel Wangchuck, and Her Majesty the Queen Mother, Ashi Tshering Yangdon Wangchuck. It was inaugurated by the Fifth King in honor of the 49th birth anniversary of the Fourth King, His Majesty Jigme Singye Wangchuck. Adjacent to the chamber of Zhabdrung is the chamber of his son, Jampel Dorji. There are also five meditation rooms to the left and right of their chambers. It also contains the chamber of Jigme Namgyel, father of the first hereditary king of Bhutan.

In 1961 Rigney School (a religious and classical studies school) was moved from its initial location at the Wangditse monastery in Thimphu, under the royal command of the Third King of Bhutan. Dilgo Khyentse Rinpoche was appointed as the first principal of the school, which accommodated 100 students. A hostel was also built inside the Dzong in 1961. The Rigney School took care of the Dzong until the Central Monastic Body took it over in 1997 to establish a monastic school.

The first renovation was completed under the supervision of Chogyal Minjur Tenpa in 1671. He expanded the Dzong and replaced all the old wooden blocks, then had it consecrated by Gyalsay Tenzin Rabgay. In 1970, minor renovation work was carried out. In 2002, the government initiated a major renovation of the Dzong; the work is yet to be completed.

The Dzong today houses the head Lama’s chamber, the Enemy Dzong (a chamber to store all weapons), a storeroom, and the monastic school. The main entrance of the Dzong was moved from the main gate at the east to the older secret gate at the south. A new conference hall was constructed after having shifted the main entrance gate. A guest house was constructed at the place which was earlier used as a stable.

The Dzong was connected to the road in 1984.

500 meters above the Dzong one can see the ruins of the Ta Dzong (watch tower). To the left of the Dzong, about 100 meters away, is a water fortress (Chu Dzong) which today is used as a prayer hall by the students. In front of the Dzong, to the right, is the crematorium. At the junction of the highway, there is a Chorten that dates back to Zhabdrung’s time.

Today the Dzong stands as a main center for tourists. As the oldest Dzong, built by Zhabdrung Nawang Namgyal, it possesses varieties of antique statues and unique arts and crafts that add vastly to the cultural and spiritual distinction of the country.

Timing to Visit the Dzong

Time to visit Simtokha dzong is from 9AM to 5 PM. During Government Holidays you can visit from 10Am in the morning.

For tourist visiting the Dzong have to get Tickets from the counter. The ticket Cost Nu.1000 per tourist.

Let us help you Plan the Trip