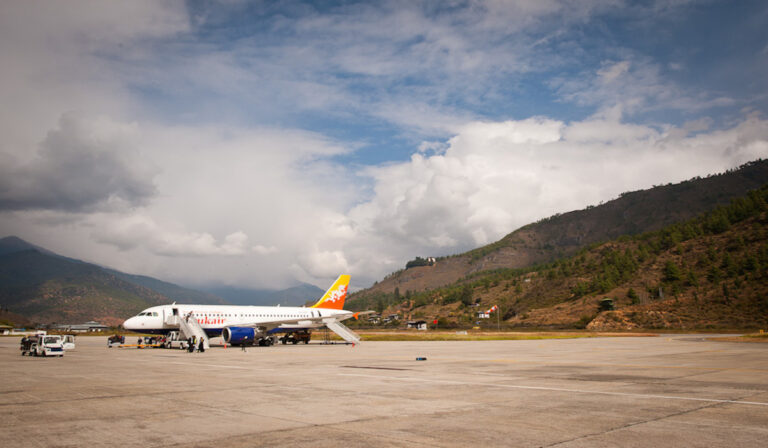 Paro International Airport  (IATA: PBH, ICAO: VQPR) is the sole international airport of the four airports in Bhutan. It is 6 km (3.7 mi; 3.2 mi) from Paro in a deep valley on the bank of the river Paro Chhu. With surrounding peaks as high as 5,500 m (18,000 ft), it is considered one of the world’s most challenging airports, and only eight pilots are certified to land at the airport.

Flights to and from Paro are allowed under visual meteorological conditions only and are restricted to daylight hours from sunrise to sunset. Paro airport was the only airport in Bhutan until 2011 Paro Airport is accessible by road, 6 km (3.7 mi; 3.2 NMI) from Paro city, and 54 km (34 mi; 29 NMI) from Thimphu by Paro-Thimphu road.

Tashi Air Pvt. Ltd, trading as Bhutan Airlines, is Bhutan’s first private airline. Its head office is in Thimphu.The airline resumed services on 10 October 2013, beginning its first international flights to India and Thailand.The airline served the cities of Jakar and in Bhutan from their commencement until June 2012, suspending them due to increasing financial losses; however, following an agreement with the Bhutan government, the airline has resumed a full schedule of flights including Kolkata to Paro, Bhutan.

History:  The airline, then known as Tashi Air, was launched on 4 December 2011.The airline is a subsidiary of the Tashi Group. The airline began regularly scheduled flights to Bathpalathang and Yonphula on 18 December 2011. After only six months of operation, however, the airline asked the Bhutanese Government for permission to suspend domestic flights.The airline resumed services on 10 October 2013 as Bhutan Airlines, having secured the wet lease of a single Airbus A320 aircraft from a Lithuanian-based company. Flights to Kolkata and continuing on to Bangkok were offered initially. The airline was required to resume domestic flights by October 2014, per an agreement with the Government of Bhutan. Following the completion of its wet lease contract, Tashi Air acquired an Airbus A319 aircraft with a seating capacity of 122 passengers on 1 May 2014.

Drukair Corporation Limited (Dzongkha: འབྲུག་མཁའ་འགྲུལ་ལས་འཛིན།), operating as Drukair — Royal Bhutan Airlines, is the flag carrier of the Kingdom of Bhutan, headquartered in the western dzongkhag of Paro.

Founded in 1981, ten years after Druk Gyalpo Jigme Dorji Wangchuck gradually began to open up the kingdom from self-imposed isolation, and seven years after welcoming its first foreign visitors, the airline commenced operations in 1983 with flights from Kolkata to Paro utilizing Dornier 228 aircraft. A switch to BAe 146-100 equipment occurred in November 1988, and, in order to meet increased demand, those aircraft were replaced in 2004 with five Airbus A319s.

Drukair operates a modest scheduled flight network within the South Asian and Southeast Asian region from its base at Paro Airport and currently serves thirteen destinations in six countries.

The airline also owns a small fleet of four Airbus A320 family jets – three A319 and one A320neo – and one ATR 42 turboprop regional aircraft.