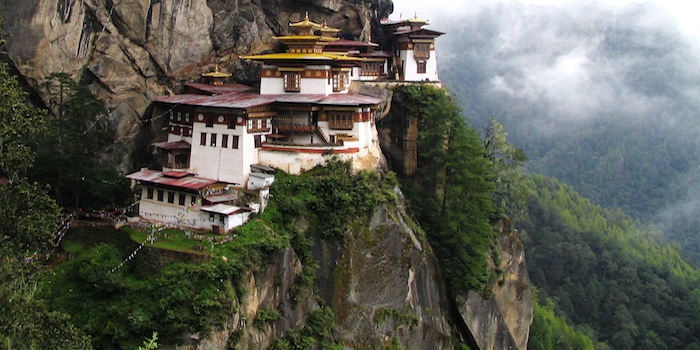 Paro Taktsang (Dzongkha: སྤ་གྲོ་སྟག་ཚང་, also known as the Taktsang Palphug Monastery and the Tiger’s Nest)is a sacred Vajrayana Himalayan Buddhist site located in the cliffside of the upper Paro valley in Bhutan. It is one of thirteen Tiger’s Nest caves in historical Tibet in which Padmasambhava practiced and taught Vajrayana.

A later monastery complex was built in 1692, around the Taktsang Senge Samdup cave, where Guru Padmasambhava meditated and practiced with students including Yeshe Tsogyal before departing the kingdom of Tibet in the early 9th century. Padmasambhava is credited with introducing Vajrayana Buddhism to Bhutan, which was then part of Tibet, and is the tutelary deity of the country. Today, Paro Taktsang is the best known of the thirteen Taktsang or “tiger lair” caves in which he and his students meditated.

The shrine dedicated to Padmasambhava, also known as Guru mTshan-brgyad Lhakhang or “the Shrine of the Guru with Eight Names”, refers to Padmasambhava’s Eight Manifestations and is an elegant structure built around the cave in 1692 by Gyalse Tenzin Rabgye. It has become the cultural icon of Bhutan. A popular festival, known as the Tsechu, held in honor of Padmasambhava, is celebrated in the Paro valley sometime during March or April

According to the Namthar of the Lhakhang (related to this Taktsang or Tak-Tsang(which in the Tibetan language literally means “Tiger’s lair”, it is believed that Padmasambhava (Guru Rinpoche) flew to this location from Singye Dzong on the back of a tigress.This place was consecrated to tame the Tiger demon. 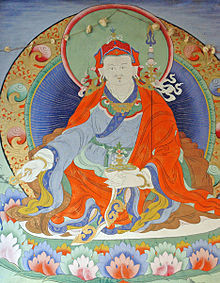 An alternative legend holds that a former wife of an emperor willingly became a disciple of Guru Rinpoche (Padmasambhava) in Tibet. She transformed herself into a tigress and carried the Guru on her back from Tibet to the present location of the Taktsang in Bhutan. In one of the caves here, the Guru then performed meditation and emerged in eight incarnated forms (manifestations) and the place became holy. Subsequently, the place came to be known as the “Tiger’s Nest”. 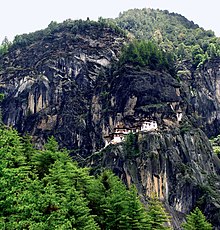 Wider view of the cliffside

The popular legend of the Taktsang monastery is further embellished with the story of Tenzin Rabgye, who built the temple here in 1692. It has been mentioned by authors that the 8th-century guru Padmasambhava had reincarnated again in the form of Tenzin Rabgye. The corroborative proofs mooted are: that Tenzin Rabgye was seen (by his friends) concurrently inside and outside his cave; even a small quantity of food was adequate to feed all visitors; no one was injured during worship (in spite of the approach track to the monastery being dangerous and slippery); and the people of the Paro valley saw in the sky various animal forms and religious symbols including a shower of flowers that appeared and also vanished in the air without touching the earth.

How long is the Hike to Tiger Nest Temple?

The hike takes between 3 to 5 hours depending on your pace. Some parts are quite steep so go slow and be sure of your footing – especially when you make the return trip downhill which can be quite slippery. The hike is about 6 km (4 miles) in length round trip.

Can you enter inside the Tiger Nest Temple?

You cross a bridge covered in prayer flags, and then make a slightly strenuous climb up to the monastery. Once at the Tiger’s Nest Monastery, your guide will take you on a tour of the temples. Backpacks, photography equipment, and shoes are not allowed inside of the monastery.

How high is the Tiger Nest Temple?

Enjoy the hike! Tigers’s Nest Temple clings to the rock towering 800 meters (over 2,600 feet) above the valley, and is located 2,950 meters (9,678 feet) above the sea level. It takes about 2 hours walk to reach the monastery from the road at Ramthangkha, 12 kilometers from Paro town.

Why is Paro Taktsang famous?

Situating on a ledge halfway up the cliff face of the mountain overlooking the Paro Valley, Paro Taktsang is famous for its very exclusive position which is unlike any other monastery all over the world.

Planning the Trip? Let Us help you!