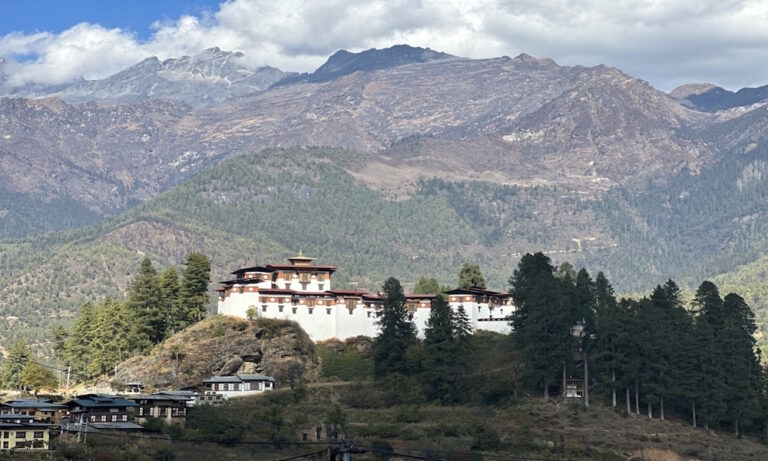 The Dzong is located in Phondey village in Paro. It is built on the summit of a rocky hill that rises steep on three sides and is accessible only from one side, which is defended by three prominent towers. It is said that each of these towers, near the summit, had a broad outcropping, the edge of which was fortified by a mud wall with holes for the use of bows, arrows and muskets. The towers guarded the approach into Paro valley from Tibet. An old footpath still leads to the ruins of the Dzong.

Drukgyal Dzong was built as one of the four principal Dra Dzongs (defence fortresses). The other defence fortresses were Gasa Trashi Thongmon Dzong, Haa Damthang Dzong, and Lingzhi Dong. Accounts differ regarding the founder of Drukgyal Dzong. Most writers feel that it was Zhabdrung Ngawang Namgyal who built it to commemorate his victory over the Tibetan army in 1649. Others believe that it was Ten-zin Drukda, the second Desi who had also served as the first Paro Penlop, who built it at the behest of Zhabdrung Nawang Namgyal. Despite differences of opinion on the founder of the Dong, people agree that it was built to commemorate the victory of the Bhutanese over the allied Tibet-Mongol forces. Hence it derived the name Drukgyal, “the fortress of the victorious Drukpas”

The single main entrance to the Dzong was defended by three round towers situated between the fort and the foot of the hill.

This entrance led to the first of three huge courtyards. Sup-posedly, above the main entrance were the sleeping quarters of the gatekeeper. The first courtyard was used for tethering and feeding the Dzong horses. The third door led to the second courtyard and above it on the right was supposedly the tower that was used as the residence of the Dzongpon, the administrator of the Dzong. In the third courtyard one would be in the shadow of the looming utse. Four-storied and rising to a height of over forty feet, it is believed to have been built over a lha tsho (sacred lake). It housed the Gonkhang, temple of Mahakala (Yeshey Gonpo) and Palden Lhamo (Mahakali).

Next to the central tower still stands a tree that locals say was home to a golden pig, which lived beneath it.

The northern side had two towers that used to guard the road from Tibet. A unique feature of the Dzong, to be seen even today, is a passage that links the fortress with the bank of the river, used during times of war. The passage was covered and small towers stood at regular intervals . These towers were built to bring reinforcements into the towers or allow for safe retreat to the Dzong above. There are slight alterations between semi-circles and vertical angles to the wall even today.

Of the two floors, the ground floor of the Dzong was used for storage purposes and as a granary. The Dzong had one of the biggest granaries among all the Dzongs in Bhutan. The first floor housed the various functionaries of the Dzong. The Dong also had a false entrance, which lured the unsuspecting intruder into a closed courtyard where the enemy could be ambushed.

The Dzong was used as a summer residence by the Ring-pung Rabdey till 1951. On the last day of the three-day annual prayers conducted by the Rabdey in the 10th month of the Bhutanese calendar, the butter lamp in the central tower was toppled and the Dzong engulfed in fire. All that remains of the Dzong are tokens of a haunted house, still-robust walls and charred remains of gigantic wooden posts and beams.

The Tibetan Invasion and the Dzongs arsenal

Drukgyal Dzong has had its share of interesting episodes. In one instance as the invading Tibetans surveyed the Dzong from Sagala, it appeared to be attached to Jana, a hilltop towards Drukgyal Dzong. As they marched onwards, the Dzong seemed to shift to a distance as if in an illusion. The Tibetans called this mid-space judae, meaning deceptive.

In another instance the attacking Tibetans were welcomed and treated as guests of honour. They were invited to a feast, but no sooner had the Tibetans began to relax and indulge themselves when their faces started swelling, slowly covering their whole bodies. A particular tree had been used for decorating the tents where the Tibetans were enjoying the feast. The Tibetans were thus left at the mercy of the Bhutanese.

As a defence fortress, Drukgyal Dzong is said to have housed the best and the finest armoury in the country; it was located in a room overlooking the southern valley. While most weapons were burnt in the fire, some were salvaged and are now preserved in the temple below the Drukgyal Dzong and in Rinpung Dzong.

Some of the very few original relics rescued from the fire of 1951 are an image of Chenrezig, the god of compassion; an image of Zhabdrung Nawang Namgyal; 108 volumes of Kan-jur (translated words of Lord Buddha); and 12 volumes of Bum (Hundred Thousand verses of Prajnaparamita); and Dolma (Tara).

Planning a Trip to Bhutan?