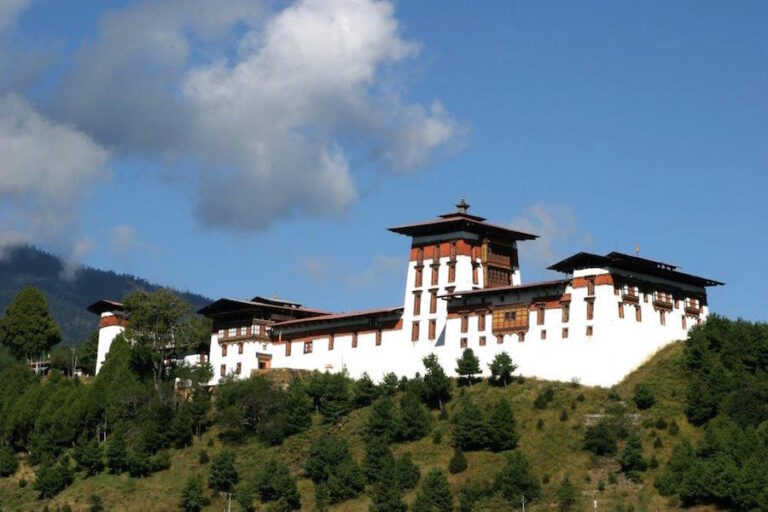 Before the construction of the present Dzong, it is said that there were continuous hostilities among the leaders of different regions, particularly in the Bumthang valley. It was during this time that the famous lineage of Chagkhar Gyalpo and Khikharathoe ended, apparently due to instability caused by many chieftains proclaiming their authority.Around this time Lam Ngagi Wangchuk (1517-1554), came to Bhutan to spread the teachings of the Drukpa Kagyupa order. He first settled in Trongsa but in later years moved to Bumthang. His intention was to construct a monastery on a rocky shelf, bordering the valley of Chamkhar.

It is said that while the construction was in progress, a white bird emerged from the building site and perched where the Jakar Dzong is now situated. This was considered a good omen, and in 1549 Lam Ngagi Wangchuk built a small temple in the shape of a Dzong and established a monastic centre there. This small Dzong was named Byakar Dzong, which means the Dzong of the White Bird. However, according to oral legend in Jakar village, originally a small fort was built at the eastern end of the Bumthang Valley; but as it was not located at a strategic point, a group of Lamas, elders and astrologers assembled to find a more appropriate location.

As they were sitting, a white bird, presumed to be the king of geese, rose into the air and rested on a spur. This is now the present location of Jakar Dzong.

Many mishaps took place after the Dong’s construction. After the arrival of Zhabdrung Ngawang Namgyel in Bhutan during the 17th century, the ruler of Tsang in Tibet, Phuntsho Namgyel, sent an army twice to destroy Zhabdrung. During these campaigns the Dzong was damaged but was later renovated by the Trongsa Penlop. After the death of Zhabdrung Ngawang Namgyal, the chieftain of Bumthang Chokhor decided to bring the four valleys of Bumthang under one order, so he acted accordingly. However, the chieftain of Bumthang Chokhor soon fled to Tibet after his defeat at the hands of Trongsa Penlop’s army.

The chieftain of Bumthang Chokhor, who had fled to Ti-bet, was able to resume his campaign and organized a large Tibetan army in his support. He returned to Bumthang and a battle ensued. In 1679 the Tibetan invaders camped by a nearby hill in Bumthang. As Bhutan did not have an institutionalized armed force to fight back the enemies, they sought the help of the protecting deities, Choe Chhong Chamdal Sum. Local lore says that their prayers were not in vain, as the gun mounted on one of the window sills of the Dzong aimed itself towards the enemy camp and fired all by itself, killing two important Tibetan commanders. The Bhutanese were victorious again and the Tibetan army fled in despera-tion. Therefore this Dzong also came to be known as Jakar Thobgyal (Thob-get, gyal-victory). Nevertheless, the Dzong

Desi, Minjur Tenpa. This time the invasions came from four different directions. Drongmedpa Thinley Jamtsho led the Bhutanese forces. Finding it a difficult task to rout the en-emies, Lam Ngawang Rabten was sent with additional forces under the guidance of Desi Minjur Tempa. The Bhutanese were once again victorious. After this victory, the Dzong was renamed as ‘Jakar Yugyal Dzong’, meaning Victorious Fortress of the White Bird. Later the name Jakar and Yugyal were merged, thus the name Jakar Yugyal Dzong came into existence.

Jakar Dzong was the foremost seat of Yongzin Ngagi Wangchuk, There was only a small temple in the shape of Dzongs of Bhutan. It was only after the arrival of Yab Tenpai Nyima (1567-1613) that the temple was expanded.This was the first renovation of the Jakar Dzong. The second renovation took place during the reign of Minjur Tenpa. He reconstructed a part of the Dzong that had been damaged during the wars and completed it in 1646. During this time he also offered many statues and idols to the Dzong as Nangtens. In 1683 the Dzong was repaired by the 4th Desi, Gyalsay Tenzin Rabgay, with the addition of a Chu Dzong (water tower) on the Western side. It forms a protected narrow passage down the hill that leads to a well. This helped them during times of war by providing plentiful water sup-ply. It is also said that if one hears a noise resembling a dragon’s roar inside the Dzong, it omens danger to the country. Tenzin Rabgay sanctified the newly built Dzong and a man named Longwa was chosen as the first Dzongpon. Long-wa was the reincarnation of King Sindu Gyab (Sindhu Raja).He was born according to the prophecy of Guru Rinpoche. In 1897 the Dzong was once again destroyed by a severe earth-quake. The first king, with the help of his sister Ashi Dechen Choden and her husband, rebuilt the Dzong. Towards the end of the 19th century, the Dzong again suffered damage when a war broke out between the Trongsa Penlop Dungkar Gyaltshen and Jakar Penlop Pema Tenzin. It was restored by the first and second hereditary kings of Bhutan.

A special feature of the Jakar Dzong is the approximately fifty-metre-high utse, which distinguishes it from most other Dzongs in Bhutan. It is possible to walk around the outer walls of the entire Dzong, but we cannot see the base perimeter of the utse. This may be in part due to the earthquake of 1897. The rebuilt structure is said to be smaller than the original.The Gonkhang is located on the upper floor of the utse.Over the door leading to the temple of the protective deities hangs an image of male and female human beings, apparently skinned. Their purpose is to keep evil away from this sacred place and to show that everything is temporal. The main statue on the floor below Lama Lhakhang is of Dolma (Tara), accompanied by those of Chenrezi (Avalokiteshvara) on the left and Mithukpa (Akshobya) on the right.

Planing the trip to Bhutan?