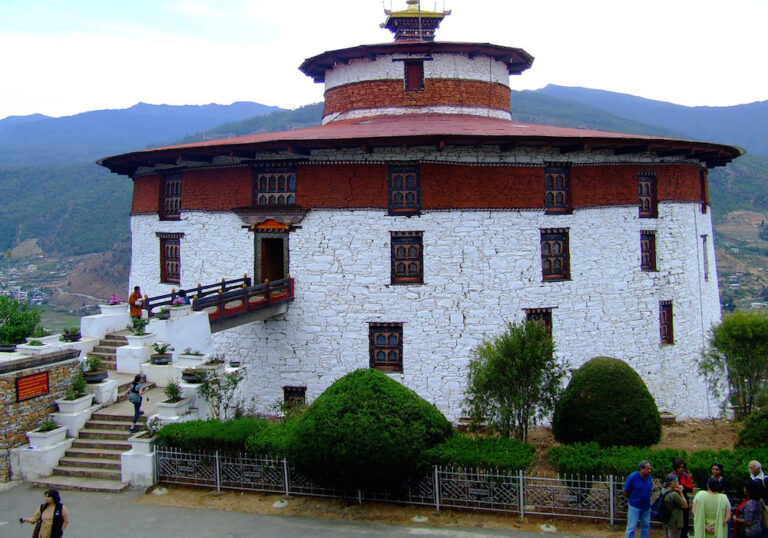 The Dzong is located about five and a half kilometers away from Tshongdu town (the main town of Paro) and 500 feet from the Ringpung Dzong. Above it is Humrel Gonpo’s cas-tle, and below it is the Do Nam Dzong.

After the Ringpung Dzong was successfully completed, La Ngoenpa Tenzin Drugda, 2nd Desi, was installed as the Paro Penlop. During his tenure the country was threatened by unceasing assaults from Tibet and India. Therefore, to protect the country from invaders and especially to protect the Paro Rinpung Dzong, La-Ngoenpa Tenzin Drugda, together with Chhogyal Minjur Tenpa, built the Ta Dzong (Ta=watch, Dzong-fortress) in the mid-seventeenth century.The Dong’s fourth floor was used as a jail in the past.There is a foot-bridge, a temporary structure and intended as such, between the upper 5th floor and the lower 3rd floor, which could be disconnected, confining the captives to the 4th floor. Being a removable bridge, it was strategically useful during times of war to limit the enemy’s advance. As a result, the Dzong is also known as Dra Dzong (Defence For-tress).-

An underground passage is believed to have connected this tower to the Pachhu River. It was mainly built to collect water during times of war and to supply the Dzong when water was scarce. Today the passage is no more to be seen, as it was buried by debris at the time of renovations. Paro Ta Dzong is more than 350 years old. It has remained uninhabited for a long time. The children in the nearby area used it as a playground and entertainment room. This caused some damage to the Dzong, and over time it almost collapsed. But the Father of Modern Bhutan, the third king, Jigme Dorji Wangchuck, out of undying fondness for the cultural legacies of the past, ordered its renovation.

Structure of The Dzong

The Paro Ta Dzong was built in a circular shape with eight stories. In front, it has a cavity which resembles the sun and the moon, signifying peace within the country and dominance over challengers. The seven-storied building it incorporates resembles the gemstone of wealth, and the outer globular wall serves as the fencing wall (chagri). It is one of the few Dzongs known that did not suffer from damage due to natural disasters or invading forces.Ta Dzong is renowned for its exemplary architectural de-signs. The Ta Dzong has a two-and-a-half-metre-thick wall, designed so that invading forces would crash upon the wall as water upon a cliff. When viewed from the outside it manifests a magnificent monastery. The wall of the Dzong is made out of crescent and cireular stones, with clay used to rigidly adjoin them.

In 1714, during the mighty earthquake which lasted for 15 days, and again at the time of another earthquake in 1896, the Dong stood unscathed, whereas many in the country were severely damaged or destroyed. Due to this circumstance, some say that the architect must have been an extraordinary man. Most visitors experience an overwhelming feeling that they can’t describe and does not compare with the effects of other Dzongs

Another oddity surrounding the Dzong is that although it is very structurally sound, there are no historical records of the architect, duration taken to complete the construction, or other related information. Truelpai Zochen Baleb, the architect of Punakha Dzong, was one of the professional builders during that time; so some people say that he could be the mysterious architect. The Dzong was wholly built of stone and wood, without the use of nails. The materials used in Ta Dzong date back to the 17th century.

After completion of the renovation in 1967, the 3rd king, Jigme Dorji Wangchuck, inaugurated the Textile Museum in 1968 and appointed Geshey Tshewang its first director and Kuenzang Rinzin its caretaker. The successive directors also contributed towards improvement of the conditions of the Dzong; but slight flaws in the right window of the 3rd storey and the wall of the 4th storey were detected during the earthquake in 2003.Renovation work was carried out again in 2003 and old CGI sheets from 1966 were replaced by new CGI sheets.Converting the Dzong into the National Textile Museum has brought many antique and precious objects to the seven-sto-ried Ta Dzong. It became the center of attraction for Bhutanese and tourists alike. So far, records show that approximately 15,000 tourists have visited the National Museum in Paro. Now it not only contains antiques but also serves as an important source of the country’s economic growth.The Dzong is now beautifully restored with the golden (Ser Tog) pinnacle. The sixth storey has a Tshogzing (tree line) of four different religious sects, which was built by sculptor Hayphu Gonpa of Paro. The National Museum’s collection also includes model portraits of Dzongs of Bhutan in the castle of Namse Tag Da Gyed, Dorjee Ku, Zhichim on the altar, a statue sculptured out of rhinoceros bone, a dag-ger, and a sutra text of Tshepagmey (Buddha of long life).The fifth storey holds Ka Nyung Thangka, bronze statues of Neten Chudru (sixteen Arhats), and a statue of Thangtong Gyalpo. The fourth storey contains a portrait of Ta Dzong, ancient stone allures, and texts about the origins of different alphabets. The third storey houses earthen, copper and bronze pots from the 17th century and before. The front of the 4th storey contains Thragyen, Zangtram and Tigtrams (copper coins), a stone from the moon, wooden cups, adornment of male and female figures, ornaments of the Merak and Sakteng people of eastern Bhutan, and a variety of swords.

The third storey also contains objects associated with the dual system of government implemented by the Zhabdrung Ngawang Namgyal.

Various religious objects occupy the second storey. At the front are objects or artifacts related to animals and insects of Bhutan. The first storey displays bamboo products and farming materials. The ground floor exhibits include arms and weapons, along with the castle of Lu (a subterranean de-ity). On the periphery are antiques from the 18th and 19th century and a cup belonging to the first Desi. At the front are antiques of bronze and copper. Outside the exit is the Baza Guru prayer wheel and a portrait of Gyelchen Zhi (kings of four directions) carved on stones. Historically, the ground floor was used as the entrance, but today the top floor serves as the entrance and the ground floor as the exit

Timing to visit the national Museam of Bhutan should know the following:

From Tuesday to Saturday, the museam opens from 9 Am to 4 Pm.

The National Museum is open throughout the week except on government and local holidays.